Why Artists Prefer CLIP STUDIO to Photoshop for Digital Illustration

CLIP STUDIO PAINT is an illustration, comic book creation and animation program. It’s quickly becoming the industry standard for creating comic books and comic book related artwork, as well as a popular choice for story board artists. So why are digital artists, comic and manga artists choosing CLIP STUDIO PAINT over Photoshop, a program that’s been around for over a decade? We asked Teyon Alexander digital artist and Content Creator for Smith Micro to explain:

CLIP STUDIO PAINT is very focused on creating illustrations, in particular illustrations for comics. Every tool in the program lends itself to the creation of a comic book, including the multi-page “story mode”, which gives you a glance of every page in your comic book in one view, and the ability to quickly add word balloons with tails. CLIP STUDIO can also import 3D models and render them as if they were line work, making the creation of background and characters much easier.

2- A more focused application for illustration and comic book creation

3- The ability to render 3D objects as line work

5- Pages for comics can be “ruled” with margins for bleed and trim, just like real art pages

9- Symmetry ruler that goes from a single line of symmetry to 16 lines, as well as snap capable rulers for Concentric Circles, Perspective, Parallel lines, Speed lines, Curves and more

10- A Material library of images, brushes, panels, word balloons, 3D objects and textures you can use in your work as needed

This comparison chart gives a quick overview of some of the other key differences between Photoshop and the two available editions of CLIP STUDIO PAINT: 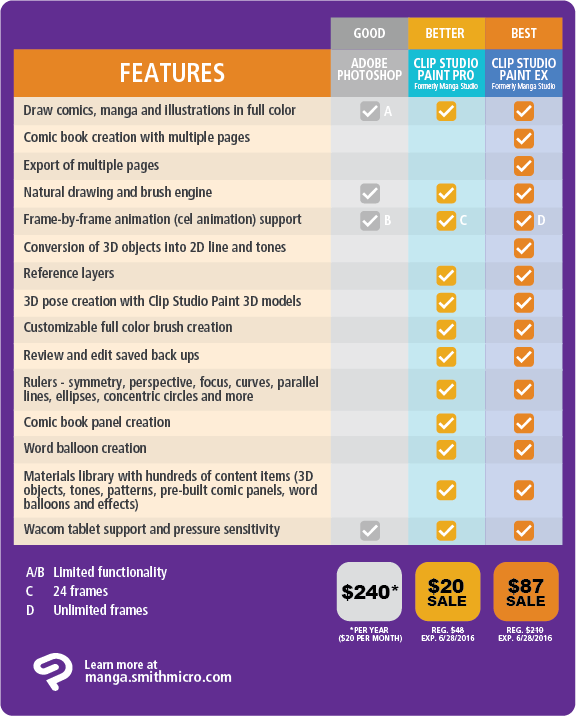