If you saw this blog and decided to check it out, then you might not have heard of 2.5D animation, or, if you have, you don’t know much about it.

Well lucky for you, you’re about to learn. But why should you care about what 2.5D animation is and what makes it an exciting art form? Well, you should care because 2.5D is the next evolution of a rich history.

Let’s take you on a quick journey of the history of animation and how we got to today's 2.5D. 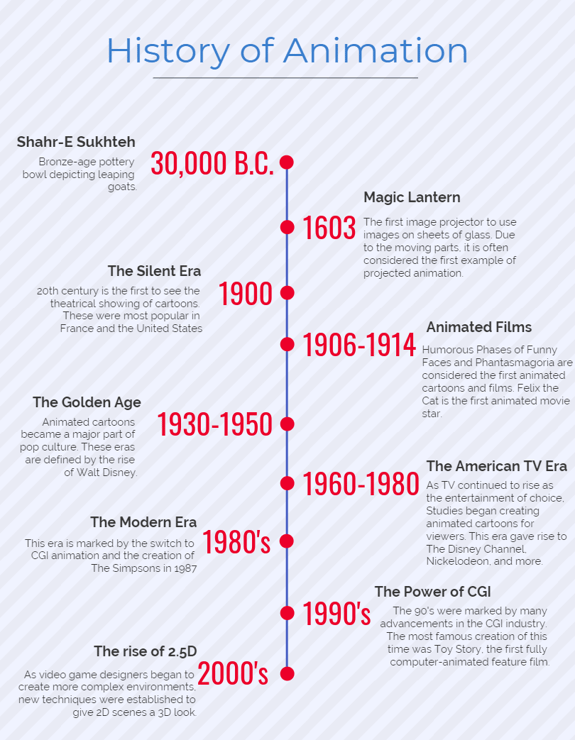 Our earliest recorded forms of animation began over 30,000 years ago in ancient Indian caves.  Yes…..people have been enjoying and creating animation for that long. Archaeologists discovered cave paintings and pottery pieces that showed a figure in a series of movements.  Sort of like a prehistoric cartoon on a very rough screen. Fast forward a few thousand years and in 2019, digital animation has surpassed traditional drawing methods in popularity.
The world of animation is split into two main styles - Two-dimensional (2D) and three-dimensional (3D).
Now while these styles may be the most popular among modern animators, there is a unique blend of the two rapidly gaining notice. This hybrid style is known as 2.5D animation and it has been around for several years but has gained popularity over the last year or so.

It is also important to note that 2.5D is NOT an animation genre, but instead a technique. (Shout out to Gore Verbinski)

What the heck is 2.5D Animation? Now that you’ve been schooled in animation, you need to know what 2.5D is and how and why it came to be.

Two-and-a-half-dimensional animation, (2.5D) is the technical term used to describe a technique that focuses on making a 2D space or image appear to have 3D qualities. Animators achieve this look by strategically manipulating scenes with tools such as layering, shadowing, perspective adjustments, and morphing. These artistic manipulations can be imposed on either a static image or a set of images in an animation in order to give the 2D space the same movement and fluidity as a real 3D animation. The end result is a pretty cool magic trick that makes the eye see this image in 3D similar to an optical illusion. Let us show you what that means. The phone screen you see here in both 2D and 2.5D is the same image. By taking a 2D image and adding a shadow to the layers, you now have the look and feel of a 3D object in a 2D space. Yes, you are seeing things! 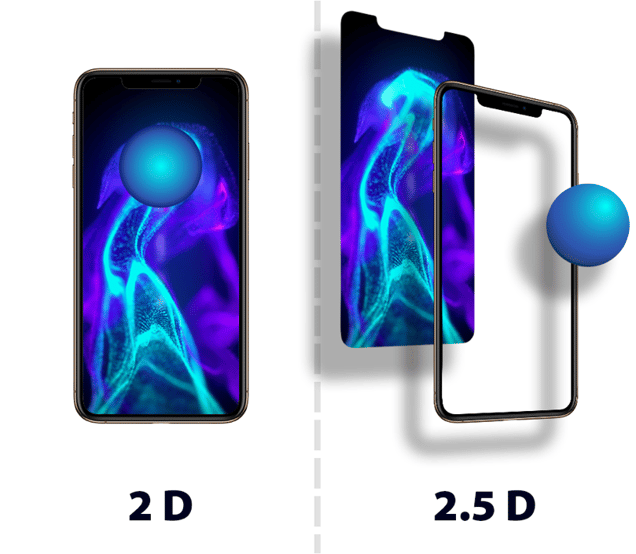 Where did it start? 2.5D animation can thank the Indie video game industry for its rise. Many Indie game designers wanted to create more visually engaging environments but didn’t have the option of designing in 3D because of technology or budgetary restraints. In video game design, only the x and y axis exist, making a true 3D design relatively improbable since 3D requires movement across all three axes. 2.5D in animation allowed game artists to breathe new life into otherwise dull and static scenes.

Not long after 2.5D became popular in the gaming industry, animators in other fields were started taking notice and making it work in their space. Many animators switched from 3D design to 2.5D because they could finish projects in less time and still get the same look.  A true case of less is more. Additionally, companies looking to save money quickly began to request brand videos and other animated materials in 2.5D because it was considerably cheaper than 3D and looked more engaging and polished than traditional 2D.

Time for a fun fact! One of vanguards of animation, Walt Disney Studio, between 1937 and 1941, used “tricks” such as lighting, motion blur, shadowing and multi-layer composition to create a 2.5D look in their animations. 2.5D was especially important for Walt Disney as many of his original animations were hand-drawn. Disney’s use of 2.5D techniques can be seen in classic movies such as Bambi, Snow White and Pinocchio.  Want to see more 2.5D in action? Check out this YouTube channel by Cookedart.

Now that you know enough about 2.5D to be dangerous, let’s recap the main facts.

If you're ready to unleash your creativity or simply want to learn more about 2D animation, check out Moho Animation software by Smith Micro.