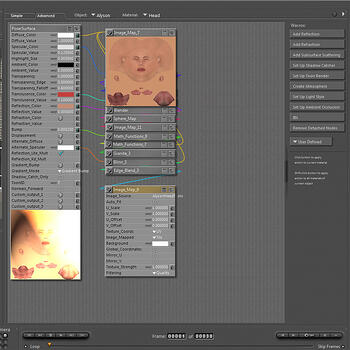 When a friend of mine got his Ph.D., I didn't see him for months. He spent every day perfecting his work in order to be the best. He was so proud of his work, he begged all of his friends to read his thesis in astrophysics.

I kind of feel like that has been the mentality here at Smith Micro before the release of Poser Pro 2010. I sit next to the engineering test area, so I hear them working hard to make sure that all of the bugs are worked out and the software works perfectly. And they work hard. There have definitely been times where I've heard, "Well we've got until 9pm."(All of the language is rated PG, I swear!)

Poser has some great new features including an enhanced user interface, which is pictured here. On my side of the team, we've been slaving over a new web site for Poser, which (not that I'm biased) has some pretty sweet features, including a gallery of great images made with Poser. You can also check out the new features of Poser Pro 2010.

We released Poser Pro 2010 last night at 11pm. There's a kind of relief in the office today, and we're really excited to show off the new product we've been working so hard on all these months. And I'd like to think that for most people, it's more exciting than a astrophysics doctorate thesis.