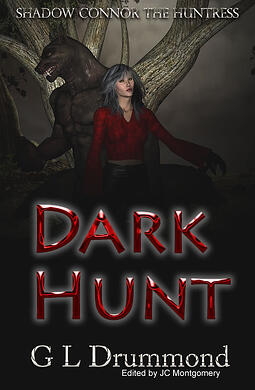 I saw four workers laying cement in a cemetery once. It never occurred to me that it was someone's job to build tombs. But why not? Aren't most people going to need them sooner or later?

It's great to realize things you didn't know you don't know. So when I stumbled upon GL Drummond's book cover made with Poser, I was delighted (and astonished) that I had never thought about who designed that art before.

GL Drummond has been using Poser for about eight years. She said her first impression of Poser was "a sort of awed glee. I can't draw, paint or sculpt worth a darn, yet had "people" in my head all the time, just begging to be let out. Discovering Poser, I finally had a way to let them out, so it was really awesome. Of course, my first attempt ended with the model squished into a mangled ball. Obviously I've learned a little bit since then."

She reads every book she makes covers for (she makes covers for books other than her own). "There's usually a scene in each story that sort of stands out and becomes the cover inspiration. The authors have final say, of course." She writes more about creating book covers with Poser in her blog.

GL would overdose on Dr. Pepper if she was allowed to and "is owned by" four dogs and a pony. If she could have any superpower, she would be the female Wolverine. "I love Wolverine. He"s the Awesome. I drool buckets over him." I concur, GL.