Manga Studio does the classics: Zombies and The Odyssey 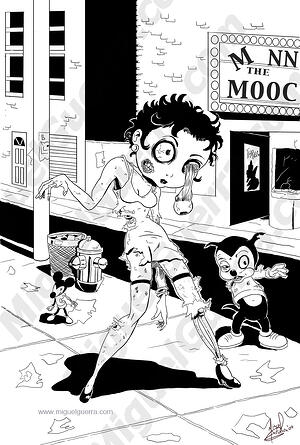 I like all things zombie. So when Miguel Guerra submitted some work from his zombie series thawas done completely in Manga Studio, I was pumped! Who doesn't love Zombie Betty Boop?

Miguel has been using Manga Studio since 2007. Before that he was old school. "I would scan in my pencils or inks and the use Photoshop. It never looked right and I spent too much time using levels to clean up the line. It was a tedious workaround that wasn't a great solution."

His work began years ago with Antarctic Press. They published some short stories and illustrations for annuals like Gold Digger and Ninja High School. Fast forward to the present: He's published two volumes of Samurai Elf® graphic novels series through Iberian Press, of which he's a co-publisher, and an all ages comic called Alric the Wild.

A Lonely Cry in Space is featured in May's Heavy Metal, which is my favorite mostly because of the back story: "I remembered the old siren story from Homer’s The Odyssey, and thought of modernizing it and setting it in outer space. I thought the siren could be made of pure light or energy, not a carbon-based being like us. She would lure astronauts instead of sailors to their ultimate doom."

And here I thought I would meet my end with evil zombies. (Like how I threw that in there for The Boss? As opposed to all the good-natured zombies, right?)