Poser in the news

As an ex-journalist, I hold a soft spot in my heart for newspapers. You know, the stuff that you use to pack up your breakables when you're moving. Yes! People used to actually carry that stuff around and read it.

Shocking, I know. So when I saw that Paul Horn designed infographics for The San Diego Union-Tribune using Poser, I was salivating.

Like most journalists, Paul Horn does a lot more than make boring stories bearable with pretty pictures. He's a comic artist as well! How awesome is that?

He has been using Poser since its inception. "Once Fractal Design released v1, I was on that bad boy. I think my serial number is 00000000001." But Poser's beginnings were hardly applicable to newspapers.

But fast forward a little bit and suddenly Poser works for more than just his comics. It works for infographics about comics! 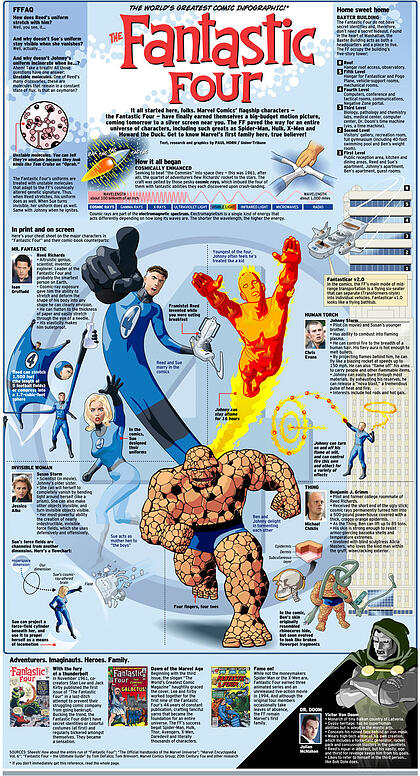 Actually, Paul has used Poser for tons of illustrations and infographics on everything from stem cell research to Harry Potter. And he's used it with his comic as well.

"I've used Poser to assist my comic Cool Jerk when I need specific camera angles and/or focus lengths. For example, I needed to show a nude Playboy Playmate (don't look at me like that -- I HAD to!) from a certain overhead angle as to NOT show any nudity. Most of the time all I need is a quick screengrab, print it out, lightbox it and work it into my strip. I've also used Poser to model 3D props and use them as instant on-screen drawing references."

Paul calls Poser one of his favorite tools in his work shed. But if you were to visit his kitchen, the ECKO egg turner wins the prize of favorite utensil. According to him, it makes delicious Alton Brown-style scrambled eggs. I guess there are a few things you can't use Poser for.