Woooohooo!!! It's an easy day for me. I'm turning it over to Steve Cooper, Poser product manager, for a detailed explanation of metadata in the Poser library. If you create or sell content in Poser, this post will benefit you! Take it away, Steve:

With Poser Pro 2010 and the recent SR3 updater for Poser 8, we were able to include support for content metadata within the Poser library. For a quick snapshot of how metadata is presented, check out this image of the Poser 8 dog with stand-in data shown in Extended Details pane of the Library. 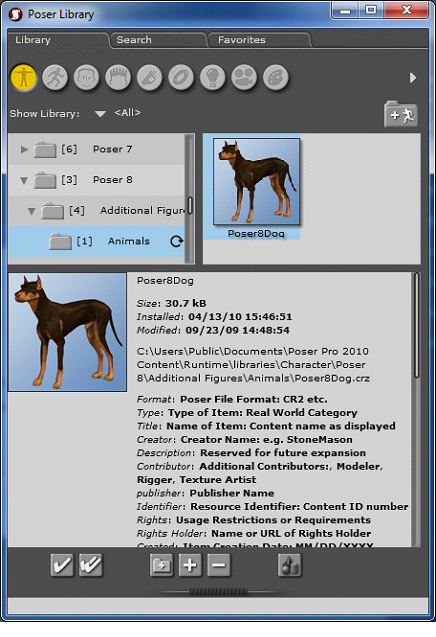 There are many benefits to metadata in Poser; but rather than try and pin down the almost limitless metadata pluses, describing it more broadly will inspire some thoughts on how metadata will be a boon to both content creators and content customers.

A few quick examples
In Poser, metadata can be used to distinguish between a figure that is hair or clothing or between hair that is transmapped or strand based. Metadata tells the user if a selected clothing item is a conforming figure and what figure it should conform to, or if the clothing is dynamic or a smart prop.

Metadata can indicate additional items that are part of a set, such as required props, clothing items, or textures that are needed to recreate a complicated content item: Think of a medieval armor set with shield and sword smart props, a helmet, and conforming suit of armor for a specifically named figure.

Metadata can provide instructions for “best use” of a content item, such as rendering settings, conformation instructions, deformer requirements or dependent objects. Metadata can include artist names, contributor names, publisher details, age ratings, and any usage restrictions, such as non-commercial restrictions.

My favorite use of metadata would be themes to describe whole categories of items; think sci-fi, fantasy, '50s, retro, steam punk, futuristic, western, medieval, urban, and the list goes on.

Design Rationale
When designing support for metadata in Poser, we wanted a system that content creators would find practical to use, that would allow metadata to be slipstreamed into existing libraries of content and be easy to develop for new items being introduced in the market. And we wanted to provide opportunities for python script developers to create powerful editing tools and data management scripts to resolve some longstanding problems. Here are a few of the design aspects for metadata in Poser.

We use .xmp (XMP) sidecar files. XMP sidecar files are simple to create and edit and will serve as a container for all the relevant information for any individual content item. The XMP files simply need to be placed in the same directory as the same-named content item, and the Poser library will display the data within that XMP file, field by field. Currently we use a simple python script to create these files from scratch, but in the very near future, expect full GUI controlled, python based editing tools for generating Poser compliant XMP sidecar files.

XMP sidecar data files can be created for any pre-existing or new content item. So as new content is made available, if it includes an XMP file, you’ll be able to view the metadata as soon as you install the item and select it in the library. For existing collections of content, the creator or publisher can create and distribute XMP files for those items, and if their customers are using Poser 8 SR3 or Poser Pro 2010, they’ll have access to that metadata. Users will also be able to create their own metadata for any content item, should they be so inclined.

We’ve used as many of the industry standard Dublin Core metadata fields as possible, and have created as few new Poser fields as required to address our unique cases. This lets us comply with an already accepted and well thought out set of definitions for various fields, rather than reinventing the wheel. The XMP sidecar file only needs to include the fields that are relevant to the content item, and only the fields contained in the XMP file are previewed in the Extended Details Panel.

The metadata fields are fully supported by PoserPython which enables Python scripters to create a number of powerful tools – as a seed idea - think of a single click of a python button that generates a list of credits for your illustration or animation, based on the XMP sidecar data for each content item in your scene.

As we evolve the Poser library system, we plan to include support for localized metadata in French, German and Japanese so content can be more universally enjoyed. We also have the goal of creating a master database on your system that can potentially manage all your content’s metadata, so if an XMP sidecar gets mistakenly trashed, moved or renamed, it can be recreated. Also in Poser’s future, expect support for metadata search, which will really help locate that exact item you’re looking for.

Evangelizing metadata is one of our long-term goals with Poser. We believe it will help transform the content market. As metadata becomes more broadly included with content, it will help users find content created by other artists that they like, learn how to get the best out of their existing content and provide better support for content creators.