I've heard people refer to Las Vegas as the adult Disneyland. I disagree; I thinks it's Comic-Con. I doesn't matter where it is, you know it's gonna be fun. And while some people might think it's a little dorky, as one of my friends said Nerds are the real cool people.

If you're gonna be there, definitely stop by Smith Micro's booth-5353 (We moved from 5238). We're having loads of giveaways for free prizes, and I might have some free stuff lying around (like comic books made with Poser or Poser T-shirts).

In addition we're having Dave Gibbons sign exclusive posters he drew in Manga Studio for San Diego Comic-Con. They may or may not look something like this: 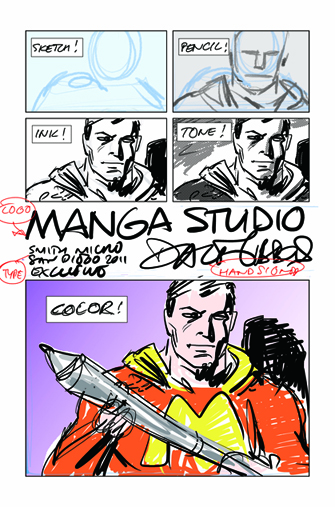 Dave will be signing posters on Thursday, Friday and Saturday (this week!) from 11 to 11:30 and 3 to 3:30. And the dinner contest has been extended until Friday!

We've also got Rob Reger, creator of Emily the Strange, signing at our booth on Friday from 12:00 to 12:30. It's gonna be a madhouse, so stop by the booth at 9:30 to get a wristband. No wristband? No autograph sadly.

Keep an eye out on our Smith Micro Graphics and Productivity Facebook page and our Graphics Twitter account for up to the minute news and random musings about the entire event. After all, it's my Disneyland and I'm taking pictures!