So what do you do? Explaining content creation in the 'real world'

Recently I've been chatting with some artists who also like to write. The result? Guest blogs! This is the first in a series.

Do you remember the very first time you heard of Poser and the 3D Art communities? The first time you logged into a Poser content site and the 'Ooooh!' feeling of excitement when it dawned on you the new world you had just moved into?

Whether you are an admirer of the 3D arts, Poser art maker or an active content creator, I think at some point there was that instance of awareness when it all became very clear to us just how large the endless world of Poser can be.

I began my relationship with Poser as a beginning graphic artist and when asked, I politely explained to people in the 'real world' that I had a graphic art hobby or that I freelanced with web design.

It began to dawn on me that there was endless potential in this program and the creative range was bigger than my own world and in fact, bigger than my own universe! That's when I began creating content and my true conundrum began: How do I explain to my friends, family, people I meet, what exactly I do for a living or hobby?

It starts with the question: 'So what do you do for a living?' This is a harder question to dodge than 'What is your hobby?' because you can simply respond with 'Digital Art' or 'Graphic Design' which often is followed with a blank stare and an 'Ohh,' which can quickly make for a great change of subject.

When it comes to your bread and butter, people seemed to be intrigued by what motivates you to keep doing the same thing every day. Seeing as how I did not go to school to become a modeler nor have I really had any training, I sometimes feel unprofessional in a strange sort of way. So the first answer I usually give is '3D Content Developer.' I've tried '3D Modeler,' and 9 times out of 10, the response I get is: 'So you're a model?' 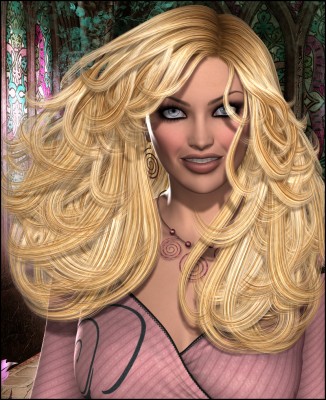 Then the questions come about what that entails. This isn't easy, but I go with. My response goes something along the lines of, "Well you know Shrek? (Who doesn't know who Shrek is?) ... Well, it's making 3D figures sorta like that but they don't move."

Sometimes this can be enough, but most of the time it's not. I will proceed to explain it's kinda like playing 3D barbies. I make their clothes and hair and dress them up and put them in pretty pictures. You can tell at this point I'm really reaching, and it's especially difficult if the person you are talking to has never owned a computer and doesn't even know what Facebook is. Yeah.

Often after having that conversation I end up feeling like I have some silly hobby for digital dolls, and the person I just spoke to thinks I'm crazy. Oh well! I honestly think this profession is amazing and after even a few short years, I still continue to be amazed and intrigued by Poser and all it has to offer, even if I DON'T really know what I do for a living =)

Poser is fabulous, and I wouldn't have it any other way, but I'm always open to new suggestions. Maybe next time I'll just say I'm a freelance plumber.﻿

You can read more about Jackie here. If you're interested in writing a guest blog about art with Smith Micro software, you can contact me with your idea and art at webmarketing@smithmicro.com.