Recently I’ve been chatting with some artists who also like to write. The result? Guest blogs! This is the second in a series, written by Doug Hills. 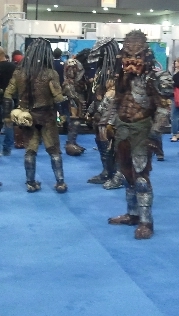 In a good way.

That's the best way I can describe the 2010 edition of the New York Comic Con and Anime Festival, held this past October 8-10 at the Jacob K. Javits Center. It was a lot to take in, for certain. Probably even more so because this was the first year in which the NYCC and the NYAF combined forces (the NYCC was previously held in early spring, while the NYAF was held around this time in the fall).

Unlike most con-goers, I was there on a work trip. Not with a booth or Artist's Alley table (personally I hate spending all day behind a table); rather, I was there to meet up with people I'm working on projects with, catch up with my Ten Ton Studios mates, and talk with other creators, editors, and what not, hopefully resulting in more projects in the future.

That doesn't mean I didn't take in the sights and sounds of the convention...I just didn't get to do things like check out the various panels that were going on. With that said, here are a few random observations I made over the three-day weekend: 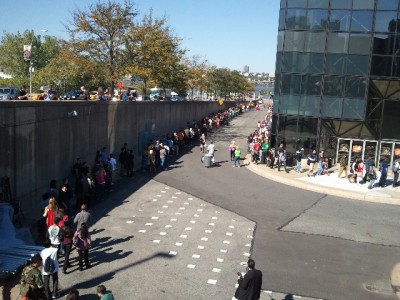 This place was packed. I mean San Diego Comic-Con packed. I don't know that if the attendance numbers matched the 150,000+ people in San Diego, but it sure felt like it. I found out that Friday that so many people were attending, that they actually suspended new Saturday and weekend passes. I have no clue if they ever reinstated that, but if I had to make a guess, that'd be a no.

Unlike San Diego, which seems to be more focused on movies, this was decidedly a Comic Con. Aside from a booth promoting the upcoming Green Hornet film, and one promoting the upcoming Alien Quadrilogy release on Blu-Ray (complete with Nostromo sleeping pods that you can fit inside and get your picture taken in) there was really no movie presence that stood out to me. This con was decidedly about comics. 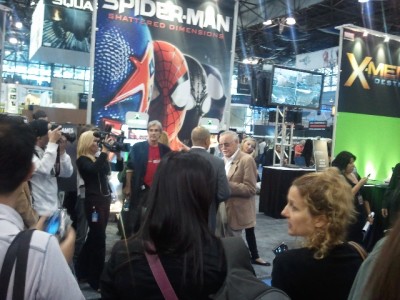 A refreshing change, in my opinion, as the focus at conventions was shifting away from comics to movies and other forms of entertainment. So it was nice to see a comics convention live up to its title.

It's always great to see my buddies from Ten Ton Studios. Not as many of us made it this year, but we still had a sizeable presence (myself, Reilly Brown, Jason Baroody, Jong Kim, Kurt Christenson, and Khoi Pham).

It was also nice to see my friend/collaborator Josh Flanagan and the rest of the iFanboy/Graphic.ly crew. I thank them for letting me hang out at their booth on Saturday and just draw. A nice oasis from the insanity of the day. Big props to them for getting a nice booth placement right between Marvel and Image. 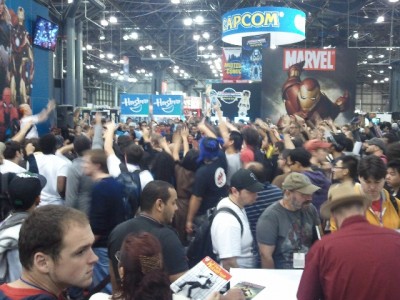 I didn't see much of a webcomics presence at this year's con, which is interesting, considering the shift to digital comics in recent months. That said, it was great to see Jen Brazas in Artist's Alley promoting her webcomic Mystic Revolution.

The last time I saw Jen was in 2007, and I'm glad to see she's still going strong with her story. It is a rarity in the webcomics business to see anyone last more than a couple of years, so major props to Jen for sticking around and producing some great work.

Manning the Smith Micro section was my old buddy Teyon Alexander, who was flying solo demonstrating both Manga Studio and Anime Studio. It was great to see Teyon again (I hadn't seen him since NYCC '07), and I was blown away by the recent work he had shown me, including a sweet color drawing of Thor color work he had done in Manga Studio.

I got to chat with a few creators that were either considering taking the leap and purchasing the Manga Studio, or have already done so, and are now getting the hang of how it works. Notable among the group is Chris Eliopoulos (of Misery Loves Sherman, Franklin Richards, and Pet Avengers fame).

We had a good chat, traded books, and I even gave an improptu tutorial on how the Panel Ruler Layer and Panel Cutter tool works. He's been doing more digitally, so if you want to see what he's working on (and see another example of what you can do with the program), you can catch him on Twitter. 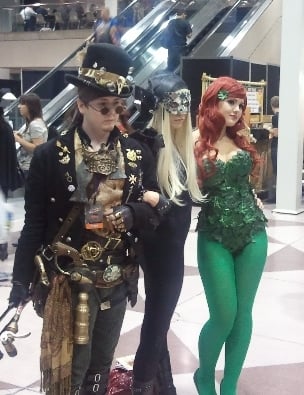 I was blown away by the costumes, and the work put into them, or at least well placed purchases on ebay :) I chatted with one cosplayer, who made a beautiful dress with her mother over the course of a week (no, I didn't think to take a photo).

The old-school anime fan in me was happy to see someone cosplaying as Misa Hayase from Macross (Lisa Hayes from Robotech). So I gave her a drawing of Misa I had drawn recently. :)
On a more serious note, what I really felt got the short straw over the weekend was (ironically enough) the Anime Festival. Unlike the NYCC, which was decidedly front and center at the con, the NYAF Artist's Alley and panel room were located downstairs, away from most everything. It was like, despite the two conventions combining, the NYAF was an afterthought.

To say that the two groups were severely segregated would be understatement. And I heard more than a few grumblings from con goers about this very thing. I also heard people (including creators) on the NYCC side that were okay with that, with a hint of derision in their voice towards the anime people. 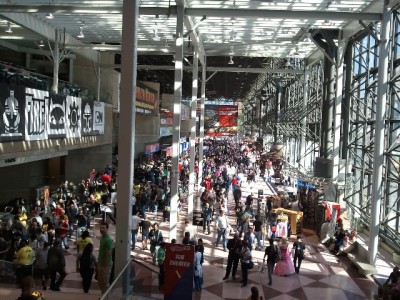 Man, that place was really packed.

So I go back to what I wrote at the beginning of this article. Was the insanity of the New York Comic Con and Anime Festival a good thing?

Thanks to Doug for his NYCC coverage! You can learn more about Doug here. If you’re interested in writing a guest blog about art with Smith Micro software, you can contact me with your idea and art at webmarketing@smithmicro.com.