Recently I’ve been chatting with some artists who also like to write. The result? Guest blogs! This is the fourth in a series, written by Craig Lew.

Rain. Not like a gentle spring shower; we’re talking a street flooding down pour of rain drops the size of small rhinos. But my film, Lil Emo’s HalloweEmo, was screening in Santa Monica so I wasn’t going to let a lil water dampen my spirits.

I entered the lobby of Martin Luther King Jr. Theater and was pleased to see Anime Studio spec sheets and discount coupons prominently displayed on the reception desk.

I stumbled through the darkness unable to find an empty seat, normally that would frustrate me, but today it was all I could wish for. I stood in the corner until Dan Bennett, the Festival Program Director pulled me into the projector room.

Lil Emo’s HalloweEmo screened shortly after that and it was well received…if laughter at the appropriate moments and an audible “Awwww” from the audience at the finish is any indicator.

Dan flipped the house lights up and asked any filmmakers in the audience to come up and speak. I was digging all the accents. Some folks came all the way from Chicago, Philadelphia, Australia, and Germany.

I yakked about the making of Lil Emo. People were surprised that it took my only 4 weeks to produce, but that’s when I revealed my secret weapons. I created the characters for Lil Emo with Poser Pro 2010 and handled the animation in Anime Studio Pro 7.

There was a buzz in the audience and they asked where they could get information on the products. ”Well, you came to the right place and as a thank you for staying, I’m giving away some Anime Studio.”

The first winner was a young lady named Emma. Then came the Lin Family, Tong Tong and Ling Ling were very happy. 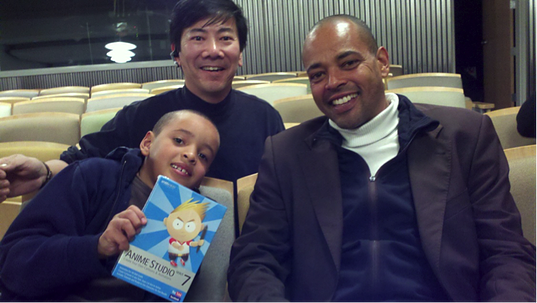 But Thomas and Francis Schumann were over the top and sent a big “Thank You” to everyone at Smith Micro. I too thank you all for making my day wondrous.

If you’re interested in writing a guest blog about art with Smith Micro software, you can contact me with your idea and art at webmarketing@smithmicro.com.