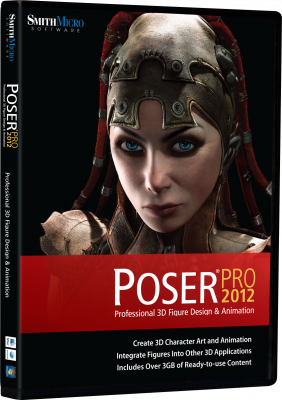 Runtime DNA joined with Smith Micro to produce an exciting event in honor of the release of Poser Pro 2012.

With the previous two releases of Poser Pro we graced the boxes with amazing imagery. Those first two boxes received critical acclaim, with the first winning awards for creative direction. We look forward to continuing that trend with another gorgeous impactful image. The hero image is an important representation of the Poser Pro brand and is used throughout the application and to market the product. We are excited to take a new approach to selecting that iconic image which represents Poser Pro.

Earlier this summer, we invited four amazing RDNA artists to participate in an Iron Render Masters challenge and then asked users to vote on their favorite entries. Our team gave each artist a set of creative guidelines, asking them to produce a candidate for the new hero image under a very rigorous timeline. All the artists were selected for an ongoing demonstration of creating excellent imagery with the software and had the potential ability to deliver what we thought would be an amazing representation of Poser as a powerful tool for illustration.

We were honored to have such an incredible selection of RDNA artists from such a great partner to participate in this collaboration. All the artists definitely delivered some amazing entries. We received thousands of votes! Check out the entries and the creative guidelines that we gave to each artist!