Santa Claus has got to be one of the hardest working people around . . . at least one night a year. Did you know that you can track Santa’s journey from the North Pole right from your computer?

Our friends at the North American Aerospace Defense Command (NORAD for short) have been tracking Santa since the late 1950s. NORAD began as a bi-national agreement between Canada and the United States to track and defend North American air space. NORAD monitors and tracks objects in space and anything that enters into the airspace of Canada or the United States.

The tradition of NORAD’s Santa Tracker program started in the 1950s. Santa's progress was reported through radio and television stations. Even popular celebrities would help report Santa’s whereabouts on the big night. As with most everything in the 2000s, the Santa Tracker moved to the Internet. Today families can visit NORAD’s Christmas site to see a countdown as well as play games in the Count Down Village and of course watch Santa’s amazing journey around the world on Christmas Eve.

The best part about seeing Santa on the NORAD site is that Santa is actually a Poser character created by Meshbox Design. Since 2005 Meshbox’s Toon Santa figure has been the official Santa for NORAD's Santa-Tracker site.

Meshbox originally created Toon Santa for Poser in 2003. Toon Santa was their first Poser creation inspired by the classic holiday specials of the 60s and 70s.

This year Meshbox announced a brand new Toon Santa for Poser users. Toon Santa 11, or Chuck to his friends, offers 11 different Santa themes from Father Christmas to Classic Red Santa and even off the cuff themes like Steampunk Santa. Meshbox has created Chuck to help 3D artists and Christmas enthusiasts create their ideal Mr. Claus. 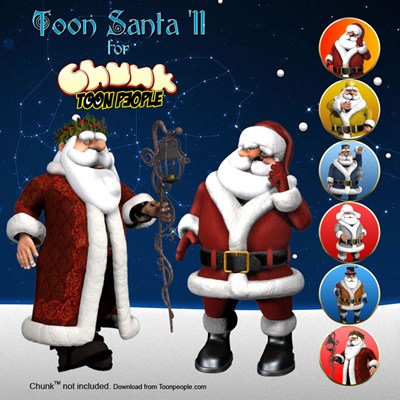 Toon Santa 11 is a complete redesign based on Meshbox’s free 3D model available at Content Paradise.

This year when you sit down with your family to enjoy the new-old tradition of tracking Santa on Christmas Eve, take heart in knowing that he was created in part by the technology produced by your friends at Smith Micro.

From our family to yours – happy holidays!