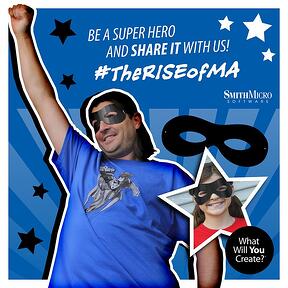 Smith Micro's booth this year is 4437. Make sure to stop by and check out all of the cool things we've got going on. Grab a MotionArtist mask! Take pictures in your mask and hashtag #TheRISEofMA on Twitter and Facebook. Check out demos of the newly released Manga Studio EX 5 and grab a special edition Axe Cop poster if you purchase EX 5 at our booth. The following successful individuals have used our products and we're very proud to share a little bit about them and where you can find them during Comic-Con.

Victor Paredes, an award winning animator from Chile, will be demonstrating products and taking questions at the Smith Micro booth (4437) during San Diego Comic-Con. Having used Anime Studio for over 9 years now, we consider Victor an Anime Studio celebrity. I don't think we're the only ones, either. The News-Gazette featured Victor in their paper when he held a seminar on how animation works. The News-Gazette called Victor, "the premiere tutor for Anime Studio."

A lot of Victor's animations are featured in our Anime Studio Gallery. To view more of Victor's animations, check out his YouTube Channel. His animation, Regálense Unas Vacaciones was featured in our blog on how Anime Studio inspires international education. We also blogged about Victor when Smith Micro won a Telly Award for Happy Earth Day, an animation created by Victor and his team. After receiving the award, Victor stated, “Smith Micro’s Anime Studio software has been a great tool for cutting down production time, as well as adding precision and detail to animation projects. My team and I are delighted to share this Telly Award with Smith Micro.”

Will you be visiting Victor at Comic-Con? Keep up with Anime Studio's Facebook and Twitter pages for news during Comic-Con. To read more about Victor and his experience with Anime Studio, check out his User Story.

Ethan Nicolle, creator of Axe Cop and Bearmageddon, will be at booth 1603 during Comic-Con. Ethan has been a user of Manga Studio for over 6 years now. You can read more of his User Story on our website. Don't forget to tune into Axe Cop on July 21 at 9:30pm/8:30pm Central and July 27 at 11pm/10pm Central on FOX. Follow Ethan Nicolle on Facebook and Twitter, as well as Axe Cop. 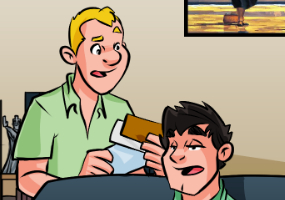 Lar and Ryan will be joined by artists Ari, Will, Joel and Randy at Blind Ferret Entertainment's booth, 1231. Lar and Sohmer are cartoonists for Looking for Group and Least I Could Do. Sohmer is also writer of The Gutters and The Bear. Lar said Manga Studio "simplifies the grunt work of comicing so I can get to the fun stuff faster. Inking is a joy in this program!" and that "Flatting in Manga Studio is stupid easy." Check out Least I Could Do and make sure to stop by their booth to say hey!
Follow Lar and Sohmer on Twitter.

Stop by Rooster Teeth Productions at booth 1437! Monty Oum, director of animation at Rooster Teeth Productions and senior animator for Red vs. Blue said, “When I’m working on Red vs. Blue, Poser is like an extension of my body. I have no time for inefficiency or unnecessary steps and I need a workflow that I can move around easily. Poser is user friendly enough that kids could use it to animate, but at the same time its powerful and flexible enough that nearly all of our rendering and character animation for the series happens using Poser.” Read Smith Micro's Press Release for more on Red vs. Blue. Be sure to watch RWBY's "Red" Trailer, featured below. RWBY was also created in Poser. 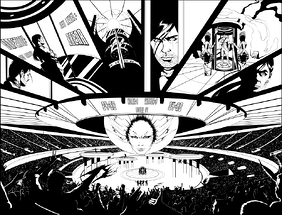 Marcus Rene Hill is a guest at the Man of Action Studios, booth 2007. Marc has used Manga Studio to create all of his artwork, including the graphics in The Machine Stop. Preview his book while you're at Comic-Con. He's giving free copies of The Machine Shops to the first 100 people! Check out his website to see more of his comics.
Follow Marc on Facebook and Twitter. 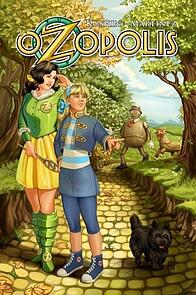 If you head over to Forcewerks at Q-14, you'll meet Kirk Kushin. Kirk is an award-winning writer, producer, and director. He's the author of several graphic novels including OZopolis and Super Teen*Topia. OZopolis was written by Kirk and illustrated by Gonzalo Martinez. OZopolis was completely done in Manga Studio, from rough pencils to tones and lettering. Check out OZopolis on Facebook, as well as Kirk Kushin's Facebook and Twitter pages. Show Gonzalo Martinez some love on Facebook and Twitter, too! All of the work done on Gonzalo's website was created in Manga Studio.