For those of you who have yet to invest in Manga Studio, Eric Merced's review will give you a clear idea of what you're missing out on. The other reviews are more likely to persuade those who own a version of Manga Studio but are still on the fence about switching to EX 5. No matter where you stand in the graphic art community, you can take the word of these very established members.

"If you're curious about what I think about EX 5 in comparison to version 5, all you have to do is read my Version 5 Review and amplify my feelings for that version x 2.

EX 5 takes all of the good things of version 5 and makes them even better with the re-inclusion of features that were missing, or stripped out, for the purpose of having an intro-level and an alternate pro-level entry app. To be fair, I don't think it's even correct to call version 5 a stripped down version. This is because version 5 had nearly all of the features of its predecessor, EX4, minus a few which were reserved for EX 5. 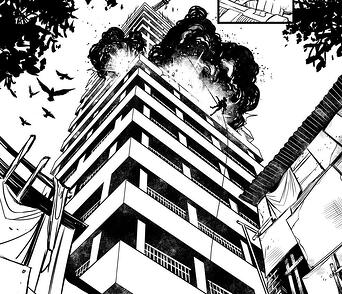 It was in the Preference section where I discovered one minor yet highly welcomed addition to EX 5 that wasn't available in Version 5, EX4, or any of the earlier versions. The ability to set the entire GUI to light (the default tone) or dark! Maybe to most readers this is a useless feature, but as a GUI nut, it's a welcome feature that brings EX5 in par with Apps like Adobe Photoshop and Pixelmator, whom all gracefully manage their own unique dark themes. You can choose between Light and Dark UI's and set how light or how dark you want the interface to look.

Another feature that was stripped out of Version 5 but made it back into EX 5 is EX4's "Story Mode". For those unfamiliar with EX4's Story Mode, basically, you have the choice of choosing to create 1 single page or multiple pages contained within 1 single document file. Story Mode became one of my favorite features in EX4 and sorely missed its presence in Version 5. And the way Story Mode feels and handles in EX5 versus EX4 is much better in my opinion. Apart from these 2 obvious editions, there are numerous under the hood fixes which, if you're on Version 5 and don't want to upgrade to EX5, are also included in the latest version of 5.

In comparison to the huge differences between Debut 4 and EX 4, there's very little that separates version 5 from EX5. So the obvious question would be what would justify an upgrade? To me, personally, I think the Story Mode feature, which has been fine-tuned and made better from EX4 in EX5, is more than just cause to upgrade. As a Comic Book Artist who used EX4 to work on a 300+ page graphic novel for a Publisher, Story Mode made my life extremely easier. Imagine, if you will, 300+ page files neatly tucked away in a single folder on my hard drive. EX4 helped in gathering all of those page files into 2 single documents per book (2 because the limit of pages I could create in EX4 was 99 and I ended up breaking each file into 75 pages each). 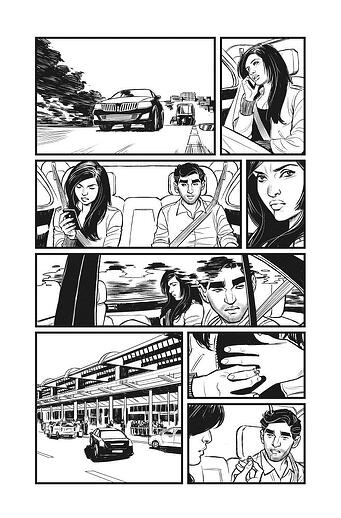 Now I'm currently working on my first original graphic novel, which has a lot of pages. If I were working with Photoshop or Adobe Illustrator, or Manga Studio 5, I'd more the likely have to put up with numerous pages tucked away in a folder. And to get a peek at each page in the form of a thumbnail, I'd probably have to use Adobe Bridge. With the EX5 upgrade, I can manage all of my pages in one or 2 documents and preview each or any page within said documents.

It's an extremely huge time saver and a great way to keep your files organized in one single App. But (and while I know many will not care for this) I cannot leave the ability to change your GUI's theme out either. The ability to change from a dark or light theme is helpful in so many ways. For example, to me, a dark GUI helps fade Manga Studio EX 5 into the background so that my main focus isn't on what's around the pages, but the pages themselves. Both Version 5 and EX5 are incredibly great. They're both the same, with the same under the hood improvements in the latest update, with very minor differences between the 2. So if you want to stay on version 5, great. You're still getting an amazing application that's not only fantastic for creating comics, but for creating full color high quality illustrations. However, if like me, you're continually working on comics with more than one page, then you're going to find EX5's updated Story Mode a God Send."

"I'm loving my experience. It's so much more responsive to my tablet than the previous version. It's great to see the inclusion of chalk pencils. I have to say it's fantastic!” Follow Miguel on Facebook and Twitter and check out his YouTube Channel.

"Overall, I find it to be a much more intuitive and engaging workflow experience than MS4. Panel folders and rulers are much simpler to understand and create, and making custom brush tools is terrific - so much easier than the complicated jumble of MS4. I've already made several custom inking and pattern brushes to add to my palette that I'm really happy with. The perspective guides are easier to use, and the inking tools seem to be even smoother and more realistic. The 3D figure models are a very handy resource, easy to use and really help me when I have to figure out a complicated pose or angle. I appreciate the addition of the story management also, which was a big feature for me in MS4. The ability to import MS4 files is great too, as I have several projects that I started in MS4 and can now finish in MS5. I'd consider MS5 to be a worthy upgrade, and I will recommend it to people. I haven't even started using the color tools yet but I can already tell they're terrific and may replace Photoshop for me, which will make life a lot easier."

"Moving from Manga Studio 4 EX to 5 was like moving from a VW bug to a Porsche. The more intuitive color features were worth the price of admission, alone. Where previously I’d ink something in Manga Studio, and color it in Photoshop, now I find myself staying in Manga Studio 5 for all my color comic book work. Add to that the much improved text tools, the naturalistic brushes, and the highly customizable tools, and Manga Studio 5 became a much more useful program.

The upgrade to Manga Studio 5 EX added multiple-page documents, the ability to open old legacy Manga Studio files, and even better text features. I’m using it every week to create my Grumbles webcomic, and used it extensively on my 40-page Über-tales comic, due out sometime next month. Thanks for improving an already superior product. I plan on using it for all of my future comic and illustration projects."