Hear what Glen Bledsoe, creator of Crazy Fly Comics, has to say. 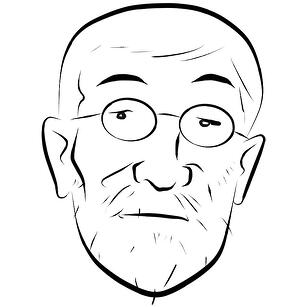 A self-portrait of Glen Bledsoe, created in Manga Studio

The Tool
It’s a wonderful thing when an artist discovers the tool that connects the idea storm spinning in his head and provides the medium to share those ideas with an audience. MotionArtist is that tool for me. I recognized its value immediately when I first saw it demonstrated. I realized that it would allow me to combine my skills and interests in visual arts, story-telling and sound design.

Early Influences
I poured over comics even before I learned to read. I'd imagine what those words balloons said--a foreshadowing of the technique I sometimes use when I create my comics today. Mostly I read superheroes comics: Carmine Infantino’s Flash, Green Lantern by Gil Kane and (when I could find them) Alan Scott-Green Lantern artist Bill Finger, Bob Kane’s Batman, and all the Marvel titles drawn by Jack (King) Kirby and Steve Ditko. Oddly enough though, I've never had the urge to create a superhero comic myself.

In my teen years I carefully studied the artwork in Creepy and Eerie magazines (I keep a hardbound reprint of volume 1 next to my desk) and the talents of Mad Magazine’s Mort Drucker and Don Martin (both visible influences, I think, on my piece “Banjo, a Ghost Story”). Cartoonist “Seth,” I have to say, also blows me away. He conveys so much with the simplest lines. These influences are probably why I work so much in black and white.

Early Digital Comics
I spent quite a few years doing an online comic for Salem-News.com. It didn't move or make sounds and was in all ways flatter than an Indiana cornfield. Recently I completed a 15 episode comic series “The Truth” for Ripperologist published in PDF. So I have a lot of experience with lay-out and a great deal of back-logged material. There are, for example, something like 14 episodes of “The Hummer” waiting for me to repurpose as a motion-art graphic novel. I have no shortage of ideas.

Sometimes my ideas are from unpublished short stories I've written. “Banjo” is an example of that. I have another short story that I’m going to do as a motion-art comic called, “Donny and the Ghost.” But that one is going to take background preparations greater than anything I've done thus far.

Fractured Inspiration
When I was a teenager I watched a television program called “Fractured Flickers.” The producers of the show assembled random passages from silent movies and then overdubbed silly dialog in the style of Woody Allen’s “What’s Up, Tiger Lilly?” It was a perfect fit for my sense of humor then as now. When I first created online comics, I was reminded of Fractured Flickers, and hunted for old movies in the public domain to dismember. I’d pull them apart and select individual frames that expressed some emotion. I did this with movies I'd never seen, so I had no idea of the actual plot. From these random snippets I made up my own plots. Many, many years of corny movie dialog floats in my brain, so it’s not hard for me to squeeze clichéd mumblings into page after page of word balloons. So in a sense for some of my work, the images write the story for me. I look at the images and as I did before I learned to read, I make up the text for the word balloons.

Panels from Scratch
But there are stories for which the process is different. There are stories in my head for which no movie stills exist. I have to create those images. The problem has been that although I draw well and enjoy drawing, I couldn't find an easy way to get my drawings into the computer. Scanning or photographing hand drawings takes too many steps. I'd tried a number of drawing/painting programs, but they were awkward to use. The truth is you can't really draw with a digital stylus and tablet like you can with a paper and pencil. When I draw I hold my pencil with many different grips, at various angles and pressures. You just can't do that with a stylus and tablet. There’s really only one useful way to hold a stylus. So to be productive with a stylus and tablet you have to develope new approaches and you have to have software designed to assist in you in those new approaches. Manga Studio does that. Making pen or pencil marks or even airbrush areas and having the ability to change their position, twist and rotate them like vector graphics is as an important invention to me as steam power was to the Victorians. Manga Studio gives me tools to compensate for my inability to control the stylus as well as I can a pencil. MotionArtist + Manga Studio are a winning combination! I can't sing their praises loudly enough. 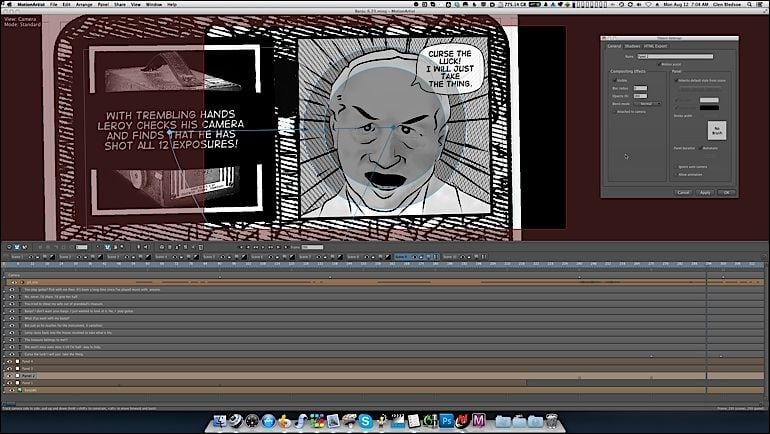 The Birth of Crazy Fly Comics
When my youngest son was in scouts I assembled slideshows for boys who became Eagle Scouts. I experimented with many slideshow apps. The one thing I noticed was that if you had any kind of Ken Burns effect (slow zooming and panning) for one slide, the next one had to move as well or the mind thought something was wrong. When I began making my first motion-art pieces I decided that the camera needed to keep in motion during the entire piece. Not so much as to make the viewer seasick, but enough to let the viewer know that the story was still rolling along. I imagined a fly zooming down onto my comics and following the story panel by panel. That’s where the term Crazy Fly came from. As soon as I saw what MotionArtist could do, I knew I had to create my own comic company based on this new medium.

MotionArtist
The camera moves from panel to panel. Objects within the panels can be animated in various ways, AND you have the power to create this crazy, faux 3D (which some are calling 2.5D) effect that rocks viewers back on their heels. I've shown people my work and I've had them grab my arm and say, “Did I see what I thought I just saw? I mean it looked like the background moved! Like 3D!” And it only costs how much? And you don't need a PhD in computer science to get it to work.

Gentle Learning Curve
It didn't take me very long to figure out how to use MotionArtist. I'd used other motion timeline apps in the not-so-recent past like Bryce and Carrera. Mostly I just looked at the online videos, read over the instructions and tried out one new feature at a time. If you’re just learning MotionArtist, I'd suggest you try the same thing. Don't try to learn it all in one sitting. Don’t get overwhelmed. Learn one new thing each time you sit down with it. Soon you’ll know it well enough to concentrate on your story and not the software. 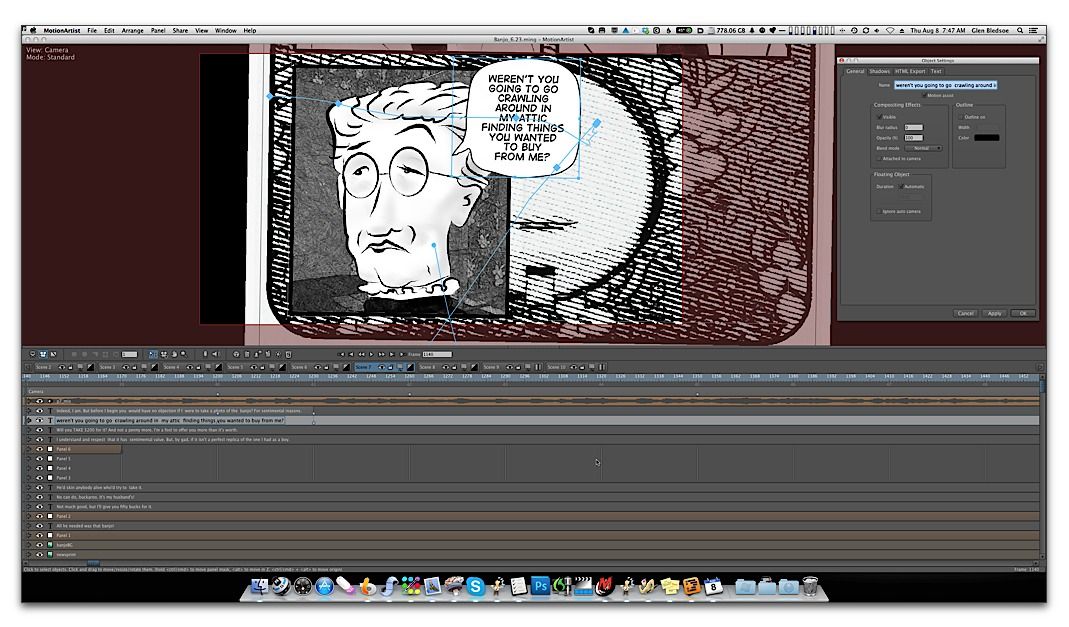 The Attributes of a Successful Motion-Artist
You want to learn to take your time when you're creating your project. Pace yourself. All artists have to learn that. If you're going to create a masterwork that will knock the socks off your viewer it’s probably going to take days, weeks or even months. Banjo took two months of constant work, up to 16 hours each day. One of my friends calls me a binge writer. You have to know when to gun it, when to let it sit (but not too long). You have to learn to keep the momentum going.

You also have to learn to decide when you’ve made a wrong turn in your story, to back up and make a different turn. Part of the reason Banjo took so long is that I ended up redrawing the panels for the first 8 scenes/pages three times because I couldn't get the look I wanted.

To develop a motion-art comic you have to create a work flow. That work flow may change from comic to comic depending on what the look is you're after. Work flow is what keeps the look and feel of your comic consistent. It gives you the procedure to know what to do on the next panel. Spend whatever time it takes to develop that workflow. Once you've done that the execution of the graphics, the sound, the animation and so on will go smoothly. Otherwise you're going to get frustrated.

Work Environment
When I work I tune out the rest of the room around me. I don't hear conversations except for the inner dialog in my head. My desk is usually cluttered with notes, pencils, pens, playing cards (I’m also a magician), and I have books of comic art stacked on the floor at my feet. I work on a 27 inch iMac screen and have a 24 inch Dell display I use to post reference photos, snippets of dialog, and moveable palettes. I use a Wacom Bamboo CTH-470 tablet and stylus, which I use with Manga Studio. I like the stability of a mouse for MotionArtist. Use the right tool for the right job.

Some Unsolicited Advice
If you don't draw, start drawing. It doesn't matter if you’re a painter, a photographer, or a motion-artist. It doesn't matter if you draw well or not. Drawing helps you see in a different way. It helps you think in terms of graphic image. I have a Bachelor of Arts in Fine Arts from Indiana University, and I spent a couple of years at the School of the Art Institute of Chicago studying print-making. I sat for hours drawing from models. I studied the masters. I spent several years just studying human anatomy (alongside other comic artists). Now I teach middle school art and technology classes. I tell my students, I tell anyone who will listen: draw, draw, draw. And now I share this same advice to you: draw. Don't be too concerned about what your drawings look like. Just be assured that the process is doing good things for your brain.

Here’s what it takes: patience, skill, persistence, talent, imagination. And the right tool. For me that tool was MotionArtist.