If you didn't get a chance to read our first User Reviews blog, check it out. There you'll find EX 5 reviews from Eric Merced, Miguel Guerra, Cameron Stewart and James Burns.

“What can I say. I've found to my digital drawing grail. I've only had it a short while and it has replaced all my other drawing software. In fact as it handles big print resolution sizes so well and has CMYK export so well I no longer need to have Photoshop and I'm experimenting with it to replace my vector software for my illustration work. It's a joy to draw in and it makes me very happy indeed.”

"Upon opening Manga Studio 5 EX I found it to be far more user friendly than 4 EX is. I know this is sometimes the reason that people would give me for not using it. It's overwhelming. Finding out that it creates a whole new folder copy is a plus. There's no worry in converting the story files and it was completely flawless.

Everything worked fast and it was easy to go from 4 EX to 5 EX, even though a few small things had moved and there were new toggles to work with. The interface is sharp and easy to customize and navigate. 5 EX is stable, even while I was coloring a piece of art that was 10 x 15 at 300 dpi with multiple layers and the watercolor brushes. I dabbled with them and was very pleased with the coloring aspects in comparison to Photoshop CS6 and after some practice and moving of swatch files, will likely begin coloring more comics in 5 EX in the future. 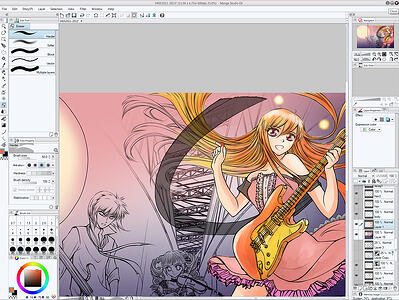 The watercolor brushes are very natural and blend well. For the first time ever, when I opened EX 5, I was IMMEDIATELY able to begin work with the inking brushes! This was one of the biggest pluses and one of the biggest turn offs in prior versions. Having to adjust the brushes was frustrating when I was new and had no idea how to fix them. Now they come adjusted for inking.

The last thing I worked with was the bubbles. There are so many improvements to bubble creation and tails that have been sorely missing. The ability to adjust bubbles piece by piece is very useful when text might not have fit in the EX 4's less flexible bubbles. The addition of a tail tool that includes thoughts is also a huge step up."

Chris Eliopoulos.
“I've been working almost exclusively with Manga Studio for a couple of years now. I've drawn the first two of my children's books in Manga Studio 5E and thought it was amazing. Then I picked up Manga Studio 5 EX and it's gotten even better. There's no other drawing program I'd rather work with. It's got everything I ever wanted in a drawing program and I recommend it to anyone and everyone.”

Tracy Bishop
“I'm finishing up a children's picture book using MS5 EX. I really like the multi-page feature. It's ideal for making books and keeping all of the files organized. I like all of the small improvements included in the upgrade. I like the performance improvements, I can notice that there is less lag with the brushes. I really like the feature where you can export the files flattened or with the layers intact.”

"I was blown away by the innovative features, the quality and efficiency of Manga Studio EX. Both the raster and vector tools are flexible and comprehensive, plus there are many features which are uniquely helpful to the digital artist. 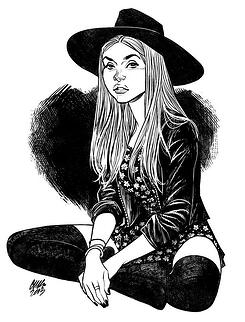 Tasks were easily and quickly accomplished in Manga Studio Ex, tasks that in the past, took several overpriced and overrated programs to complete. I would have no hesitation recommending Manga Studio Ex to any digital artist interested in consolidating their toolkit and improving their workflow while maintaining the highest professional standards."

Sarah “Neila” Elkins
“I've really enjoyed using the program! I like that I don't have to jump to another program to color things with masks (which is how I generally color things). The basic 3D models that come with MS EX 5 are going to be VERY handy to use as reference, especially for difficult to find poses and angles.” Sarah live streamed and recorded herself using Manga Studio EX 5. Take a look here.

"This software is a joy to use on the Surface Pro.”

"I've already been using Manga Studio 5 for a little while (since its first release in fact). But, have been unable to switch from MS4EX fully until now - as a working professional I'd really become dependent on version 4EXs story files. Really love all of the changes between 4 & 5 already. But the addition of story files and how they're applied (smart and simple) makes it an absolutely essential upgrade for me.

I've also started now to really delve deep into the customization options on Manga Studio 5 - setting things like keyboard short cuts, etc., so the interface - which I'm glad to say is greatly improved on version 4 (and the updates between 5.0 and 5.0.2 have made it better) can actually disappear into the background while I just get on with my work. The tweaks on the lettering, are great to see and make it a very viable option for me to letter my own projects with (though there is still a ways to go before it can really be used for lettering, especially in the area of sound effects). I love it, and without hesitation would recommend it to any professional comic artists. In fact, version 4 was something I'd recommend unequivocally to anyone drawing comics, version 5 I'd do the same but extend that to anyone coloring comics.

I realize MS5 is really, truly, a different piece of software from MS4 and you're building features into it - I've been amazed at how much better it is than MS4 in so many other areas. It's a glorious bit of software! (Though I DID use it as an excuse to upgrade my computer to a MacBook pro)"