In celebration of Poser’s 20th anniversary, we’re bringing back some historic case studies that are still timely and applicable today. These great snapshots show how Poser solved problems and still is doing so.

I have been using Poser since version 2. I picked it up in a used bin at a computer show around 1996. It was actually new, but I got it for only $5.

I first found out about Poser after I saw several online images and had wondered how artists had created human form images. My first impression of Poser was that it is an artist's model tool. Once I started to take apart texture maps I began to discover the fun of creating my own models. It was at that point that I began to develop a talent for using the tools to create dynamics. Before Poser, I used CorelDRAW! and Photoshop. I still use Photoshop with Poser. I also use Vue and Bryce often for parts, pieces, bits and backgrounds.

As Poser has evolved, so has its ability to create an infinite number of characters. I'm using Poser Pro and I'm happy as a clam in mud. The shader system and rendering engine can do some really wonderful things that I'm still discovering.

GHOST was created in Mr. Wing's 4th period English class when I was supposed to be reading "The Scarlet Letter." She's been with me ever since. Life being what it is - Children, houses, cars, payments, late payments, late late payments, too much work, no sleep, too much sleep, no work etc - she sat quietly on the back burner until her time was right. I had written a horrible screenplay of GHOST that frankly sucked harder than a black hole. Then as fate would have it, the children were grown and gone, stuff was paid off and I'd reunited with an old flame that happily never died out. That flame later became my wife who besides being brilliant and beautiful also is a writer and a damn good one too. She took GHOST in a direction that I never could of. I'd never wanted a 'chick with a sword in a suit' story even though she was a chick with sword in a suit. My wife took my characters and what few pieces of my story that didn't suck too bad and created a world that is completely original, engaging and unique.

I was at a convention in NYC when I was introduced by a good friend Dave DeVries to an editor at DC comics, Kevin Kiniry. I showed him my portfolio and he said, "Yeah, we've got some work for you." I was absolutely FLOORED. A comic geek turned police officer from Maine was just hired to do digital character work. Me, working for DC Comics. Go figure. For a guy who was told by 'art students' that he'd never go anywhere with this crap, I felt pretty damn good. I'd actually achieved a lifelong goal by not shrinking back. Another time I was flabbergasted was at Comic Con San Diego [At the Poser booth no less] when I met a rep from LucasFilm. I got a gig doing a cover for 'Star Wars Insider' and several other pieces. 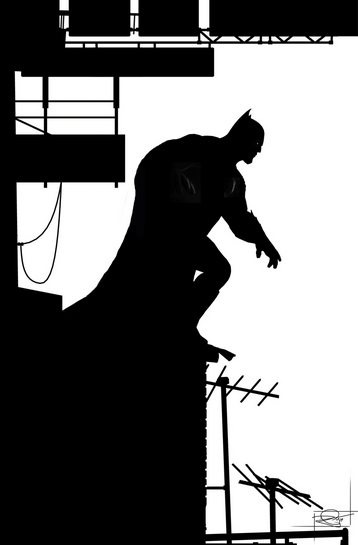 For anyone out there who has been told to 'forget this foolishness and get a real job,' I'm living proof that a comic geek can transform his passion into cash and still feel good about himself. There's no better joy in the world than seeing your work out in the field, and I don't mean the one behind the house. I've done pieces for DC that everyone in the world sees. You've seen it, you just don't know it. I see it, they like it, they pay me for it. I'm happy.