Paolo Ciccone, the creator of Reality teaches us how to create great catch lights in a portrait with Poser by emulating the same process as photographers use. He shows us how to do this by using Reality, a rendering solution that gives Poser the ability to use Physics-Based Rendering (PBR).

When we look at a captivating portrait, almost invariably we go to the eyes of the subject, and some of the most inspiring portraits show a glint of light in the eyes of the subject. That glint is called a “catch light” in photographer lingo. A shot from the “The Misfits” shows this concept at work in a remarkable way; both Marilyn Monroe and Clark Gable have excellent catch lights that add life to the shot. 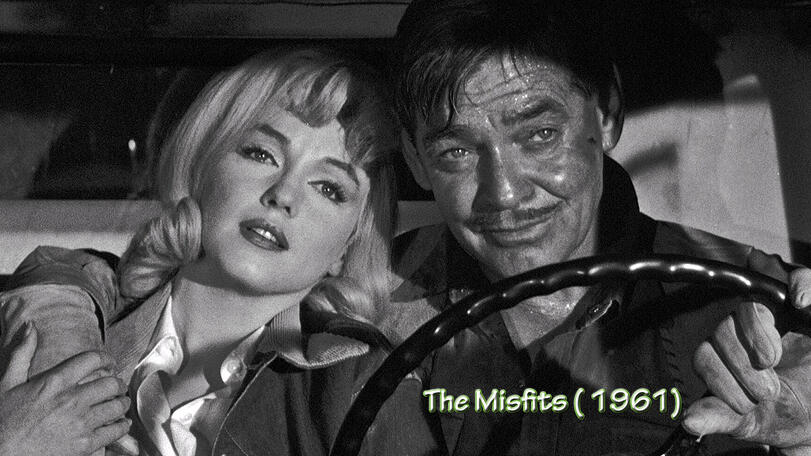 Without that sparkle in their eyes the shot would not be the same. A lot of work and expertise went into creating this. Make no mistake, that shot is composed and lit very, very carefully.

In this post we are going to discuss how to create catch lights in a portrait by emulating the same process as a photographer would. We’ll talk about what conditions are necessary to generate this effect in real life and how we can replicate them in software. We will do this by using Reality, an affordable rendering solution that gives Poser the ability to use Physics-Based Rendering (PBR). Since Reality gives us the power of PBR, in Poser we can replicate the same lighting model used in the movies instead of resorting to some sort of shader trick.

Creating reflections of light in the eyes of a model is one of the most popular topics of discussion in Poser forums. To understand how to do it we need to step out of the 3D world and look at how this works in the real world.

I often see eye textures for Poser with the reflection baked in the iris. That is a big mistake for a couple of reasons:

The first step in getting realistic eye reflections is to use eye textures that have no reflections baked in. The second is to make the reflection occur in the cornea as it does naturally in real life and it will give the curvature of the cornea to anything that is reflected.

The third step is to select the right type of light. Often people have asked me for help after they’ve tried to use spotlights without success. It’s not surprising that they weren’t able to create catch lights as spotlights are the wrong lights for this task.

When we see catch lights in real life, what we see is the actual reflection of a large light source in the cornea of the eye. For example, the reflection could be a window in the room, or a large soft box which is a photographer’s light that is a large box with a diffuser in front.

A spotlight however, actually has a physical body even though most of the time they are generally small. In Poser and in Reality/LuxRender, a spotlight is a source of light that is emanating from a single, infinitesimally small point. A little point will make no visible reflection in the eyes, therefore it will not create catch lights.

Now we know what the right conditions in the real world are to create this effect we can begin creating in our 3D world.

First we add the figure to the scene, in this case I’ve selected Victoria 4 and I’ve added the Dublin skin by Danae. Without doing anything elaborate I pose the character for a portrait: 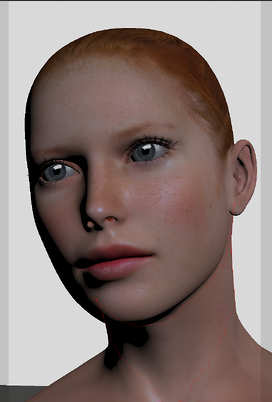 We see that there is a reflection in the figure’s eyes. In this case we are lucky because the skin package uses the right approach to create this effect. One of the reasons why I chose this skin is because the reflections are not baked in the iris. Instead, they are created using the alpha channel for the cornea. That is not correct in a physical sense and it will not work for us, but we can easily disable that effect in the Poser room material. We don’t need to do that, it’s just an extra step to avoid being confused by reflections that don’t exist. This kind of fakery is something that we can remove from our workflow if we are interested in realism.

In the Material Room I select the 5_Cornea material and this is what is presented by Poser: 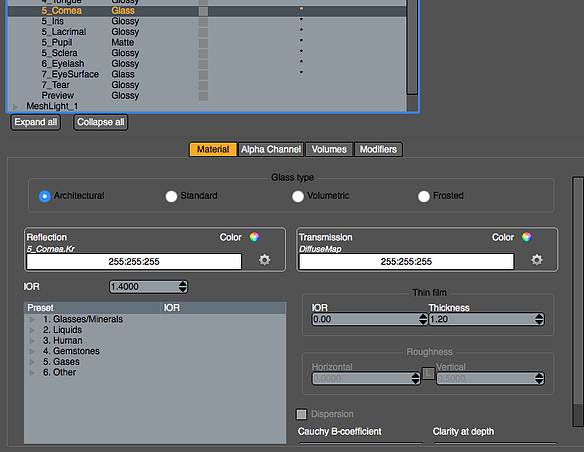 Note the use of the ambient channel to make the reflection happen. This is exactly the kind of hack that we avoid when we use Reality and Lux. By using a physics-based renderer we simply create the same situation that exists in the real world: place a light source in front of the subject and that light will be reflected in the eyes.

Now we have a solid understanding of what the proper conditions are to create catch lights, in part 2 of this tutorial we will see how to apply this theory to actual Poser scenes.