We sat down with world-renowned comic book artist and Official Influencer David Gibbons, to discuss some of his latest and greatest projects. In this three part blog series, Dave describes how CLIP STUDIO PAINT played a pivotal role in creating pages in the 2000th issue of 2000AD, the cover for the Dan Dare book, (a collection of his 2000AD strips) as well as pages in the 500th issue of Doctor Who Magazine. He explains what his creative process was like:

This was drawn for the 2000th issue of the UK weekly comic 2000AD and features Tharg, the fictitious editor of the comic, as he travels through space-time portals to visit various classic characters. 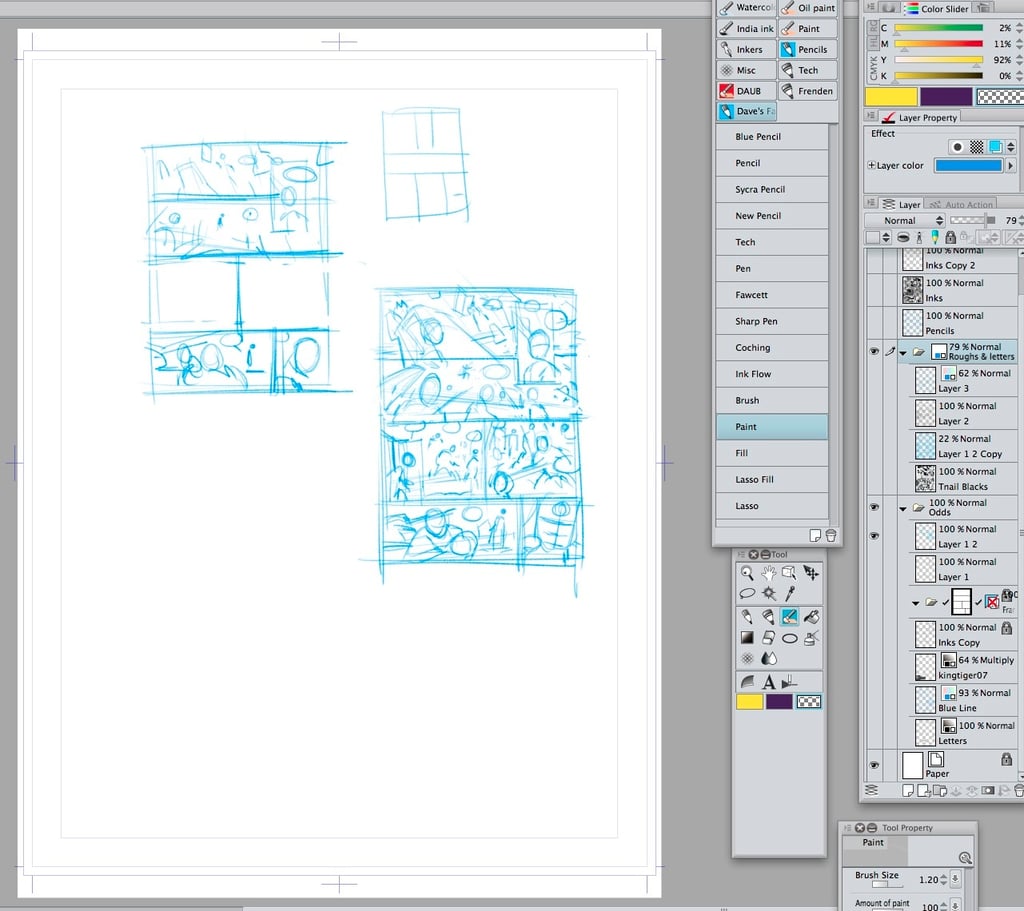 This was the first step I took in creating this page. The image above shows my thumbnails; just little scribbles I did straight in CLIP STUDIO PAINT. They’re really just my first impressions for what the pictures might be after reading the script. I then select one of these thumbnails and, using the transform tools, match it to the size and proportion of the actual page. 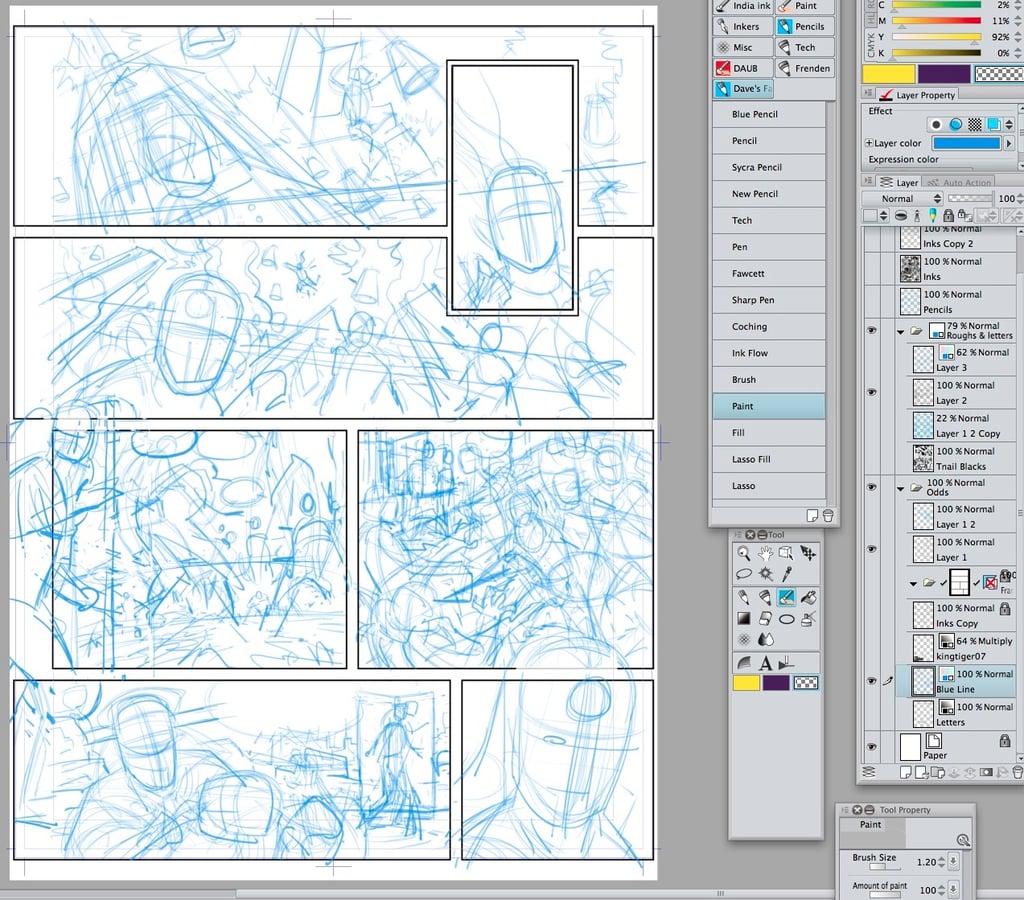 Next, is the rough blocking of the panels. I've established horizon lines and the different elements within the pictures in very simple terms just to show the shapes and proportions. This could be done fairly quickly, but with some care. 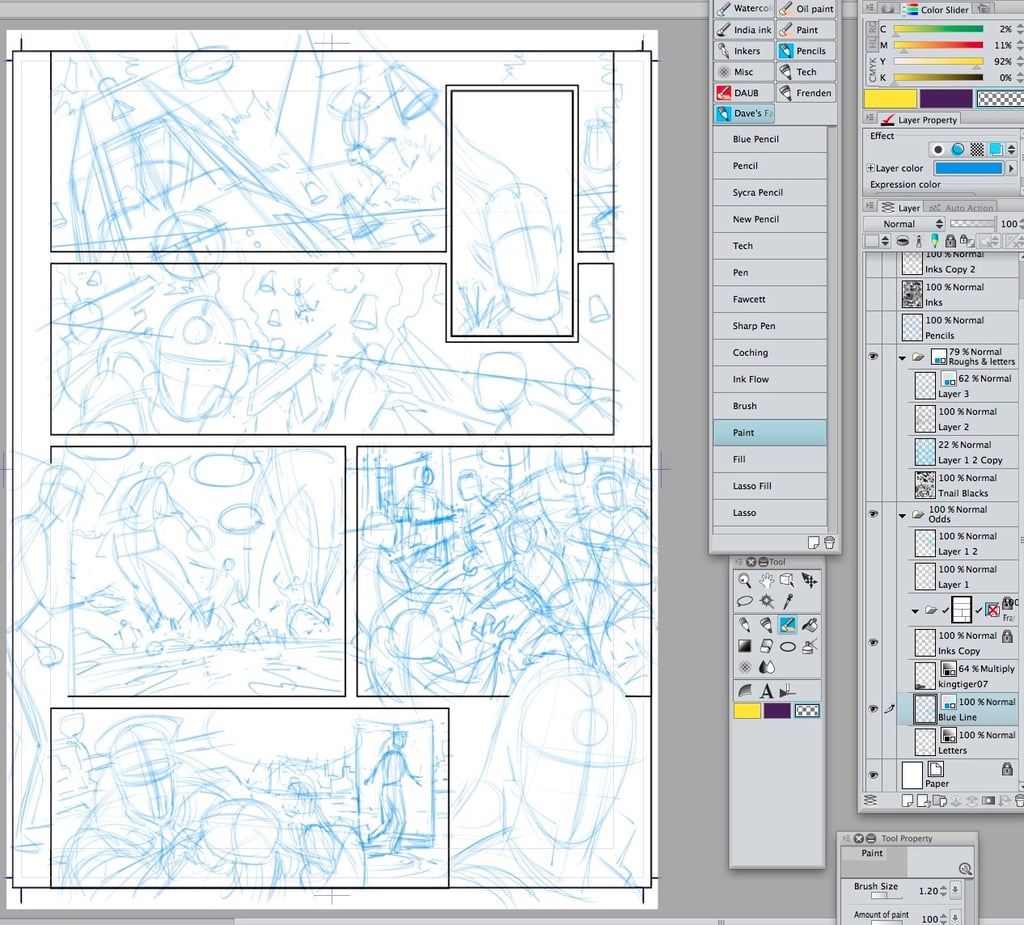 This next step is the "block in", it is drawn over the top of the previous image, refining the forms and the anatomy and the general composition of each picture. Although you can't see it here, I would have a Sub View window open, where I assemble all the reference I need for the various characters and scenes that I have to draw. I find it a very useful feature of CLIP STUDIO PAINT. This particular page was very reference heavy, featuring characters like Rogue Trooper, the VCs, Bad Company and Fiends Of The Western Front. The Sub View window keeps these multiple images to hand and can easily be flipped through to get the reference for the particular picture I happen to be drawing. 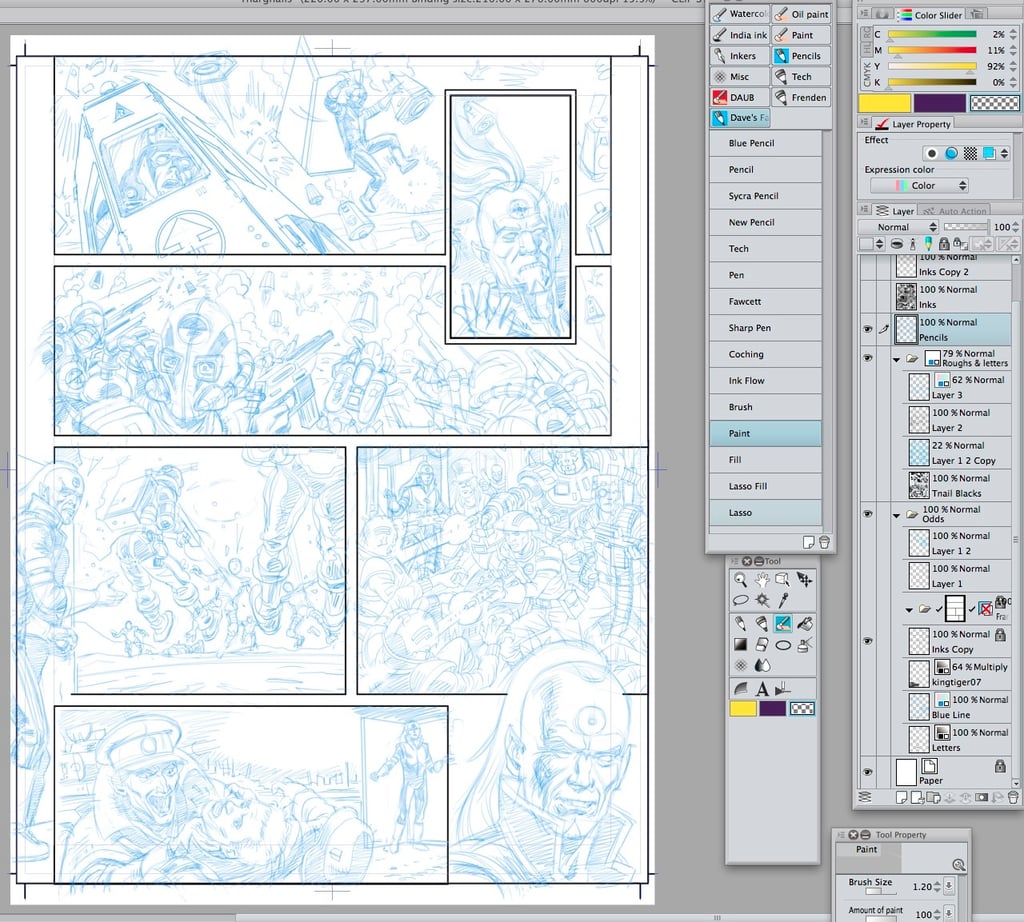 The image above is the finished pencil layer, drawn over the top of the block in layer. I would actually draw this in a gray color, converting to blue using the Expression Color in the Layer Property palette. This makes it very easy to ink over because the blue lines fade into the background. Also, at this stage I have rasterized the panel borders on a separate layer to get a better idea of how the finished piece will look. 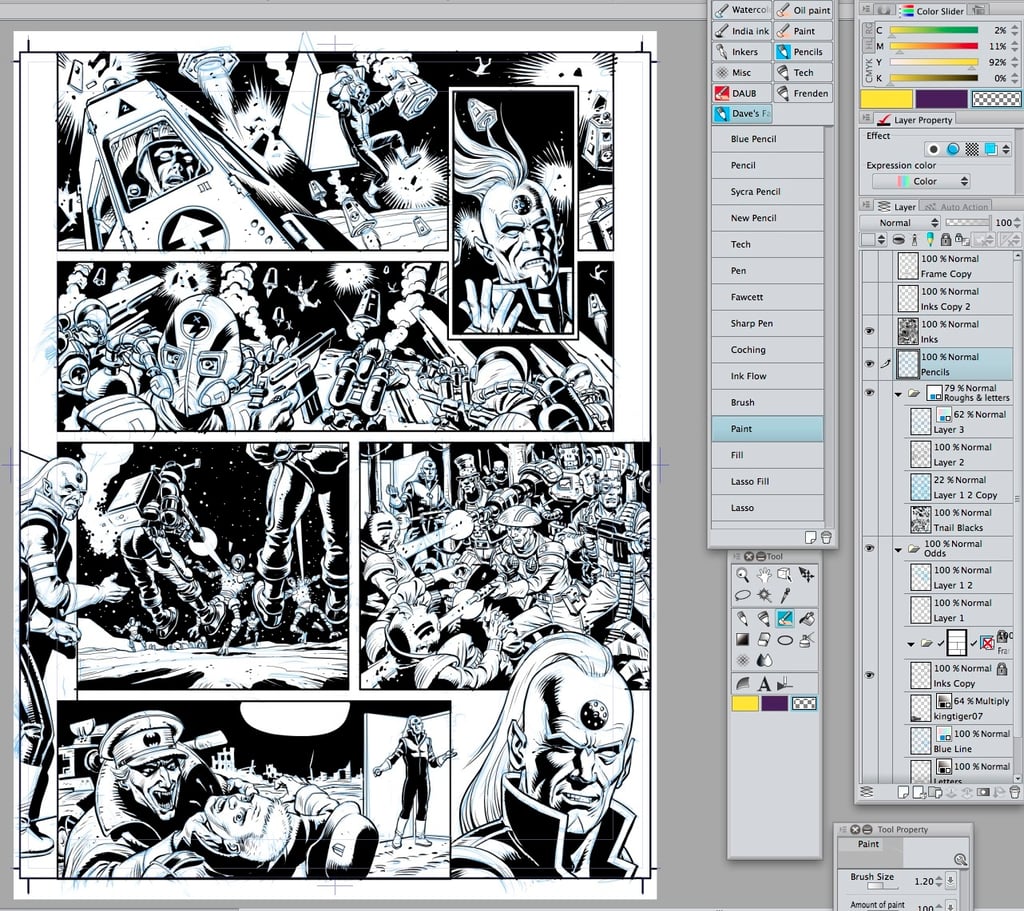 This is the finished inks layer, over the top of the blue pencils. This screenshot shows how much is added in the ink stage. I like to think of the pencils as the scaffolding or guide for the finished inks, so I don't show line thicknesses in the pencil stage. Having something to add in the inks keeps interest and concentration up and transforms the inking from being merely a tracing process. 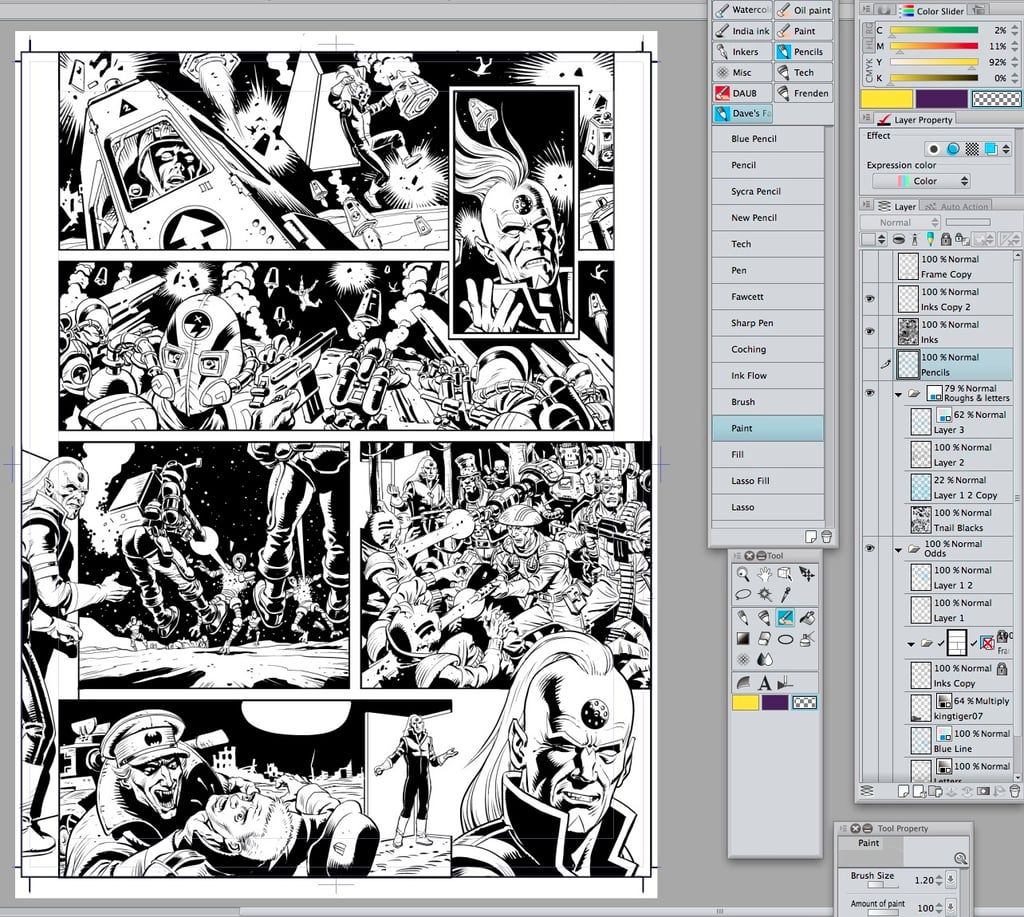 This final step shows the finished inks with further modifications made to the frames. I've also filled the "gutters" between the panels with white on the panel border layer to remove stray ink lines from outside the panel borders.

Stay tuned for part II to take a peak inside Dave's creation process for the cover of Dan Dare!