How to Create Reusable Actions in Anime Studio Pro

Actions are the easiest way to save movements you want to repeat later on your animation, when using Anime Studio Pro. They are great to save walk cycles, jumps, facial animation or any other movement that you need to be constantly played in the Mainline.

For this exercise, we will use this character from the Library: 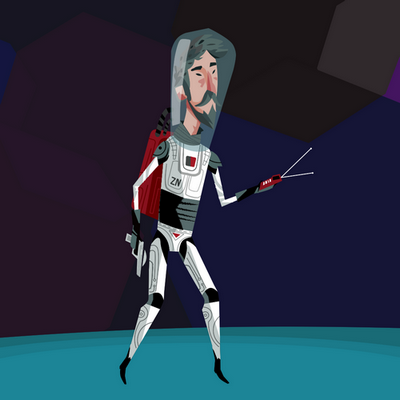 To create a new Action, you must first select the layer of your character. In this case, it’s a bone layer.

Now open the Actions window in the menu Window - Actions. Or simply press Ctrl+K (Cmd+K if you are on a Mac).

Press the New Action button and name your action. In this case, it will be called Jump.

Once you have named your action, the Timeline changes its color. That means now you are not animating in the Mainline, but inside of the Jump action.

Using the animation tools, we will create the action we want:

Once we are ready with the animation, we must double click on Mainline, in the Actions windows.

That will bring us back to the Main animation. This is the animation which will be exported in the final video.

So now we can insert this action in our Mainline.

Here’s an animation without the action inserted yet. The idea is the character will jump several times:

As you see, our character is just moving from one side to the other, but not jumping yet.

So now we will introduce the Jump action into the Mainline.

To do that, we simply go to the frame we want, select the Jump action (by clicking once over its name) and press the Insert Reference button:

You can insert the action as many times as you want. And, since it’s inserted as a reference, if you double click the Jump action in the Actions window, you can modify the jump action. Any modification you make will be reflected every time you use the action in the Mainline.

Actions can be used for other tasks too, like creating Smart Bones or Blend Morph targets.

To learn more check out this tutorial: