Poser & the Story of the NORAD Santa Tracker

Tell us a bit about the NORAD Tracks Santa program?

On December 24, 1955, a call was made to the Continental Air Defense Command (CONAD) Operations Center in Colorado Springs, Colorado by a little girl who thought she was replying to a printed advertisement in the local paper about the location of Santa. The number was a misprint. A Colonel Harry Shoup answered, and thinking quickly, gave out some plausible information. This was followed by many more calls the same Christmas Eve.

This was the genesis of the program, that later turned into a radio broadcast. When NORAD was formed in 1958, it continued what became a tradition which included volunteers using telephones and computers to answer calls on Christmas Eve. The program is supported by unpaid corporate sponsors and no public funding.

From 1997, NORAD Tracks Santa moved from the radio to the Internet. Many celebrities and public figures have been involved over the years. In 2014 for example, First Lady Michelle Obama helped man the phones at NORAD Tracks Santa.

On Christmas Eve, you can track Santa in a 3D environment on NORADSANTA.ORG! 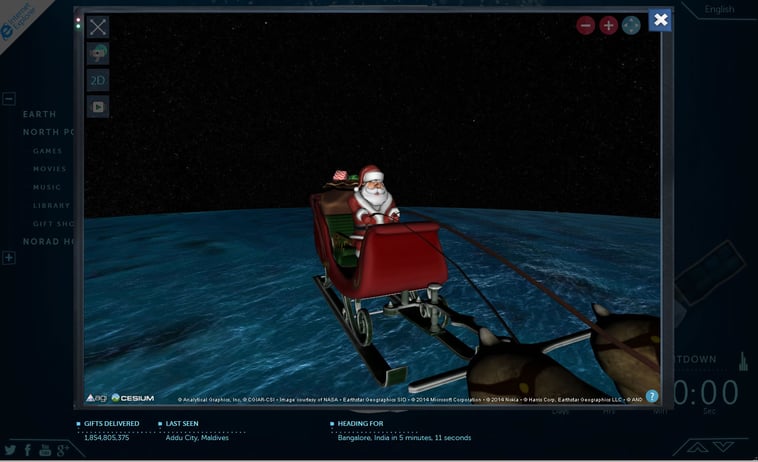 How involved in Meshbox Design?

Proactive International's Meshbox Design division became a corporate sponsor in 2006 and has supported the program every year since. Every December 1st, the website comes to life with music, web based and downloadable games, holiday information and more.

The NORAD Santa is based on our Toon Santa (tm) character, the original 3D Santa Claus and modified at the request of NORAD. There are some specific differences between the characters but they are for the most part compatible with each other. Our Christmas Sleigh and Toon Reindeer character also appear in some places.

We are involved over a five month planning period that culminates with the big event.

Since we became involved in the program in 2006, our Santa has been utilized by other sponsors and in other supporting events around NORAD Tracks Santa. For example, he made an appearance at the Denver Airport, Continental Airlines in flight video and even the New York Stock Exchange.

How do you use Poser for NORAD Tracks Santa?

A lot of the 2D art gets generated from the NORAD Santa, but it is rendered in Poser first. We were involved in the Poser 11 beta and so were able to create new renders utilizing the fantastic new Superfly renderer and some native shaders.

Can Poser users also use your Santa?

Yes, they can get our Toon Santa character through Content Paradise. Each year, the character gets a new theme. We also release a series of new buildings in the North Pole (home of Santa), based on the theme. There are seven added each year to Content Paradise. The theme for 2015 is Fedoraville Santa, which is a 1950's style based on a "googie" design, and just a little bit of the TV show Mad Men. Fedoraville Santa is the ninth theme, and if you get Toon Santa you also get all of the other themes as well - each with its own set of poses, props and clothing additions. You have Classic Red Santa, Steampunk Santa and more!

The NORAD Santa version is classified and only a part of the NORAD Tracks Santa program.

Very new, to coincide with a fantastic new site update for 2015, you can also find some of our original music (credited as Meshbox Music) playing on the main website. Some of these tunes are also available through Content Paradise. We are also working with OneRender.com to produce a 360 degree 3D rendered video. Since OneRender supports OBJ import it makes it quite easy to get Poser related content into it- also free during its public beta period too!

Thank you Lynn for sharing the story of the NORAD Santa Tracker! I'm sure lots of children will be on there looking out for the Big Guy this year!