Quick Poser Tip: How to Use Multiple Graph Tools in Poser 11

Poser's 3d animation tools are both powerful and easy to use. How can it be both, you might ask? Mostly, it's a cleverly designed user interface. The basic functions are obvious. This makes it easy for new users to jump right in and start experimenting.  As you need more power you can bring the power tools into play. There are actually 3 levels of animation tools in Poser.

The Basic Time Line Tool is simple and straight forward. Anybody can pick it up and use it the first try. As you need more power you can bring the full animation pallet up. This gives you a visual representation of the full animation by displaying all the "Key" frames where animation data is stored. This is commonly known as a “dope sheet”.

When you need fine control over a single parameter in the animation we have the Graph Tool. As its name suggests the Graph Tool displays a graph of the motions of a single animated item during the course of the animation sequence. The graph tool has recently been enhanced to support multiple instances. Now you can have several graph tools open at once with each of them tied to a specific animated control. This gives you even more control over your animation than ever before in Poser.

In the example you can see two graphs open. One for each axis of motion of the ball. The graphs not only give a visual representation of the motion during the sequence but they are fully editable. You can drag and drop keys to change motion and timing. You can even duplicate keys to create repeating motions or loops. 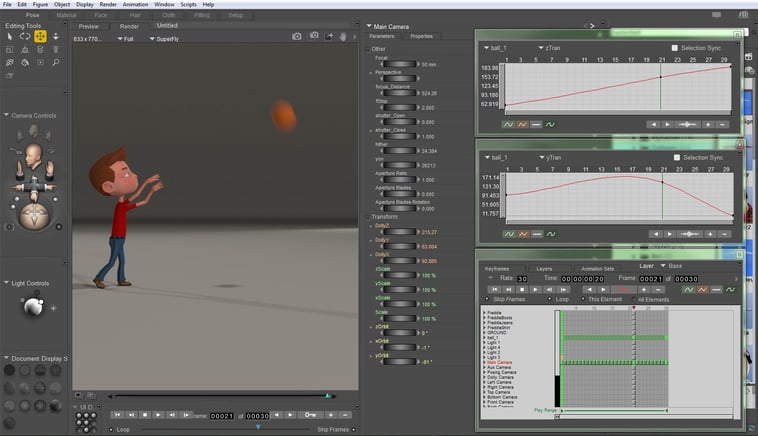 Example of two graphs open, one for each axis of motion of the ball.