Have you ever wondered how PC video games were made or how to turn an idea for a game into reality? Wonder no more! Indie game developer Neil Jones explains his formula for game creation success in this 'Video Game Creation for Beginners' blog series. He goes step by step in detail on how he used video game software, Poser 11 from conception to creation. In this post he explains steps 5 and 6, Modeling and Animating. For information on Steps 1 and 2, see The Idea and The Games Design Document. For steps 3 and 4, see Concept Art and Poser and the Concept Stage.

Once you have the concepts you can begin to model characters and their accessories. At this stage for a small Indie team, I’d suggest not getting too bogged down trying to create all models, instead create a few base accessories and characters. That way you’ll have some base characters with accessories which can be coded and animated to give you a foundation from which you can build the subsequent assets.

If you can use Poser characters then you’ve already completed this stage for the characters as you’ll have fully textured, skinned and rigged characters! Using the Poser Walk Designer tool you can quickly import a walk animation into the game engine ready for a programmer to develop the character further.

Importing into the Game Engine:

I exported FBX files from Poser with animation, morphs and characters directly into the Unreal Development Kit (UDK) but for future game projects I’ll move development to Unreal Engine 4 where the following process will still apply.

The import process to UDK imports morphs, attached clothing and textures such that you have a base model. Once your model is imported into UDK you can then adjust the morph parameters so it looks like the character you created within Poser. Additional assets which might come with the Poser character, can be imported separately or with the character itself.

Using Shaka Zulu’s shield for example which is included with the Poser character, I’d import both the character and shield into UDK then within the UDK I’d create a shield attachment socket on his hand. I’d then create an archetype for the shield and attach the shield archetype to the socket after spawning the character into the game. 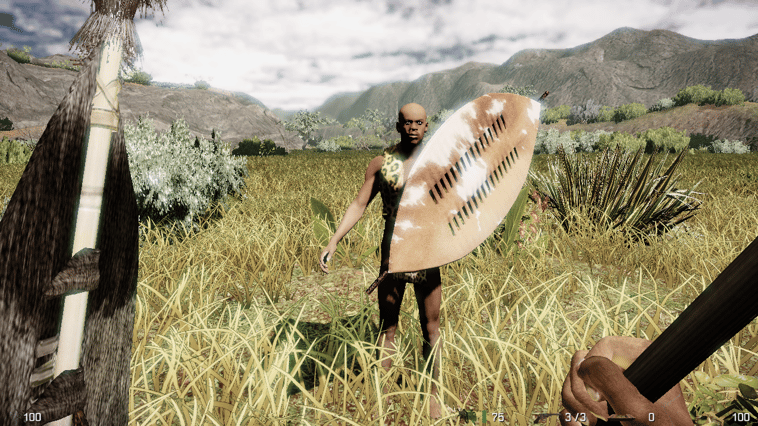 This process was also used for the horse where the horse was exported from Poser then imported into UDK. Horse attachments such as the bridle, blanket, saddle, weapon etc were attached as archetypes. By adopting this approach you create a single base model where assets can be added dynamically in the game as you need them, such as through in game rewards.

As mentioned previously, with small teams it’s easy to get bogged down in the detail such that you never seem to move forward. Therefore, I’d recommend only making a few core animations at this stage such as the walk, run, fire and reload animations for the character and its accessories.

Note, If your game is a first person multiplayer game then your workload doubles as you need to create animations for the first person arms as well as for the third person.

For my last game I created the animations for Shaka Zuku and the animals from within Poser.  For example:

For my last game I exported the animations to FBX files than imported them directly into UDK where they were applied to the characters.

Stay tuned for our next post on steps 7 and 8 and learn how to start programming your game and creating the User Interface! Hopefully steps 5 and 6 have given you plenty to work with for now.